If you’re planning a trip to Puerto Vallarta, Mexico, chances are you will come across a number of day trip excursions and adventures out on the water. When I moved here a few weeks ago, I knew there were a few tours I had to go on right away because I kept hearing wonderful things. I went on two tours so far both of which I really enjoyed. One was a full day trip to the Marietas Islands (Las Islas Marietas) and the other a half day excursion to go whale watching. Both of the tours I went with Tours In Vallarta and were on a sailboat, I can’t recommend them enough, my friends and I had such a great time! 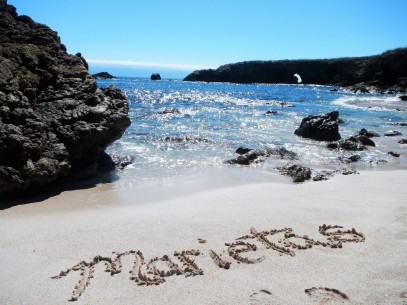 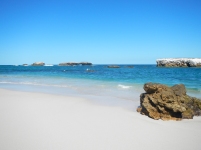 When you Google what to do in Puerto Vallarta, Las Marietas will show in search results immediately. These islands are situated just off Banderas Bay and became famous for the Hidden Beach (Playa del Amor, or the beach of love). The Hidden Beach is said to be created by deliberate bombings that the Mexican government was controlling for target practice during World War I. As a result of the bombings, crazy cool rock formations made up the area including the Hidden Beach which seen from aerial images above is only accessible by swimming to it.

The tour I went on took us out to the islands on a sailboat and started with whale watching! The main gem of this tour was to make our way to Las Marietas. As we neared the islands, we were told that this area offers some of the best snorkeling and that we would have an opportunity to go in and out of some of the caves and tunnels seen in the large rock formations. Our boat of about 30 had about half that were brave enough to jump in the cold water. The day we went was pretty cold so a lot of us didn’t last the entire time allotted to snorkel! I sucked it up with my friend and we jumped in to see what we could find unda the sea! I also took time to relax before heading back on the boat…

Next up on the day tour was to explore a remote beach on Marietas which was undeniably my favorite part of the entire day! Being a beach bum, my friends and I thoroughly enjoyed spending time on this beach where we actually spotted several blue-footed boobies. The last time I saw those I was on the Galapagos Islands, I had no idea they could also be found living as far north as Mexico! On the rest of the tour sailing back we saw more whales, sea turtles, and baby dolphins. 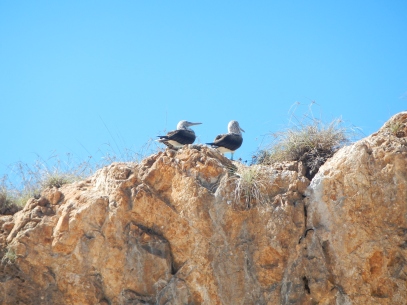 Given I am living in Mexico during winter, I knew that I would have an opportunity to see whales. Humpback whales make their way down to the warmer waters in Mexico during winter months (typically November – April) and I was ecstatic to see so many whales on my excursion! With wildlife, you never know what will happen, whether you will actually see any or if you will be blessed with a number of encounters one after another. The boat, weather conditions, and positivity of the crew combined allowed for some amazing opportunities to catch glimpses of whales in the wild. Not only did we see whales, but we also were lucky enough to see sea birds, baby dolphins, seals and sea turtles! 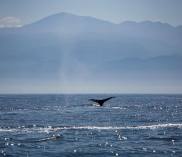 Disclosure: This post is sponsored by Tours in Vallarta. All opinions are my own.

2 thoughts on “Snorkeling and Whale Watching with Tours in Vallarta”

The palm trees of Palm Springs 🌴 where the wild things go 🎶
Walking among the ^tallest^ trees on the planet ~ whaaaaaat! Just another post on why NorCal is better than SoCal 👊😏✌️
Finding time for some forest bathing🌲🌲💚🌲🌲
She sure is sexy ❤️🌁 Who out there likes to analyze dreams and what they mean!? 🙋🏼‍♀️
📍 made it to the “good part” 🏊🏻‍♀️ @mangopoint
“You could have been anything that you wanted to” 🎶💃🏼🌺 Saint Lucia’s Botanical Gardens are 👌 shout out to my sister @houg0072 for planning a fun family adventure & for spotting this little guy hanging out 😍🥰 #botanicalgardens #stlucia #saintlucia #flowers #youcouldhavebeenaflower
Memories 🥰😍 Recap of visiting the TALLEST trees in the world 🌲🌲 with a side of southern Oregon mixed in 👌 a fun trip w @fortwoplz !!! Highly recommend - seen here the redwood national park, jedidiah, fern canyon, prairie creek and the Samuel H Boardman scenic corridor 🌊🌲🥾
evenings in sf 🌙 🌫
M🎃🎃d
A foggy timelapse view of the Arch Rock on Oregon’s southern coast - can’t explain how cool it was to see the fog roll in one *minute* and the sun shining the next 😍, I highly recommend a visit to the Samuel H Boardman State Scenic Corridor - I didn’t even know it existed until we started planning our Redwoods trip in northern CA & as soon as we started researching we knew we would have to keep driving north into #Oregon 😍 worth the extra distance and time #oregonisbeautiful
Loading Comments...
%d bloggers like this: